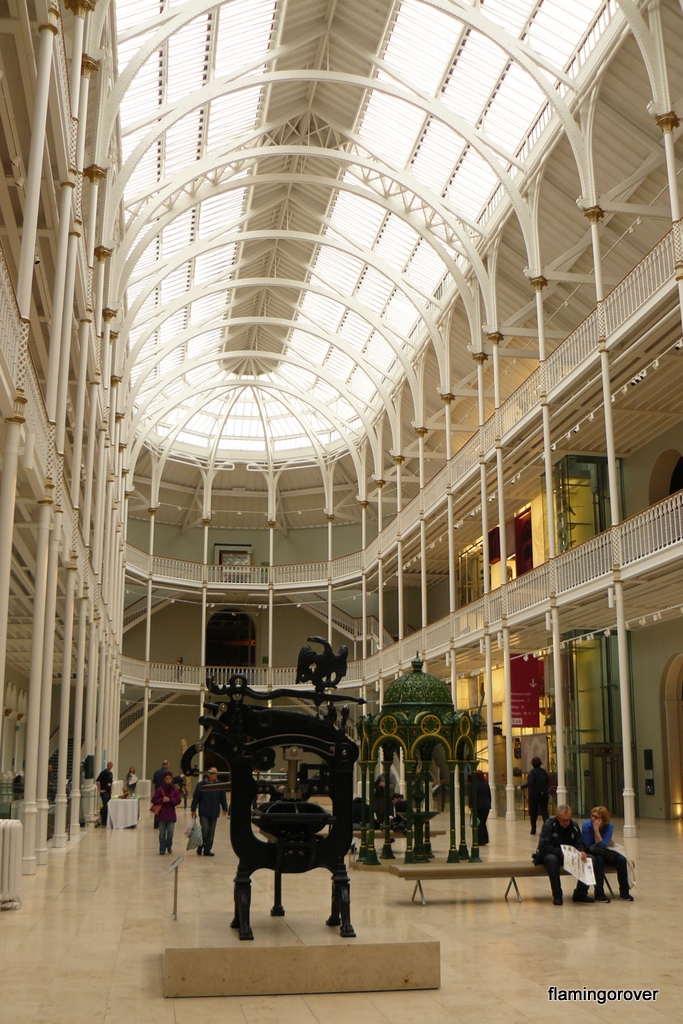 I had lunch at the museum today. It is the best option on a rainy day in Edinburgh if I have a packed lunch. I was on my way to the library in a round-about manner, and as hunger pangs struck I thought having my lunch before getting down to work would be the smart move.
Museums are great spaces for learning and seeing into the heart of things; whether it is the solar system or the inner workings of a clock you can usually find an exhibit to tell you all about it. As well as the science I go for the curiosities and the people watching. I sometimes have the time look about at an exhibit or two, but often I just eat my lunch and watch the folks go by. Either way it is usually educational.
Today, as I sat on a bench and ate a father walked past with two young boys in tow, the boy must have pointed to an exhibit over to my left, wanting to explore there, but his father said no.When questioned as to why the man replied:
‘Because boy’s aren’t interested in jewellery.’
While I was dealing with the narrowness of that particular gender stereotype a small girl posed for her mother by an ornate fountain, rather than simply standing beside the enamelled drinking fountain, the mother insisted that her daughter pose with one leg bent backwards, in the manner of a Hollywood starlet receiving a kiss.
The learning and teaching going on seemed to be about how to be a good little boy and how to be a good little girl. Apparently boys don’t like jewellery and girls need to make themselves as alluring as possible in order to get boys to give them jewellery.
‘Argh! Bahh! Yuk!’ I say.
I finished my lunch feeling a little unsure about the state of the world and wandered over to the exhibition in question. Jewellery is something people chose to carry with them close to their bodies. To display publicly as a part of saying ‘this is me,’ and in my experience jewellery collections can be mind expanding, fascinating, intricate, capable of interrogating stereotypes, full of stories and wonder.

And I was not disappointed.

First up I learnt a new word – topophilla – a term used to describe a strong sense of place or identity among certain people.

A sense of place – New Jewellery from a Northern Land, is an exhibition curated as part of a doctoral research project. Beth Legg asked sixteen artists from Iceland, Scotland, Norway, Finland, Sweden and Denmark to create jewellery in response to an environment significant to them.
Each artist was asked to put together a topophilla box displaying the inspiration for their work. These 3D scrapbooks are little windows into the concentrated essence of these artist’s love for a place.
Looking in one you might see a photograph of a man staring out at you from his sparse kitchen, others contain a miscellany of objects: bone, paper, clay, metal, plants, glass, red wax, driftwood, scraps of poetry, rope, shells…
Many of the boxes could easily be rock-pools transported into the gallery, you can see quickly that for many of these northern artists the ocean has a strong influence, but the environments referenced are not exclusively  nautical.
Nevertheless they are all things any good little boy or girl could be fascinated by.
Above each box there is the work of two jewellers. One is the artist who made the toppphilla box, and the other is the response of an artist in the group who received the box at random and anonymously.
Taupanen’s topophilla box contains, not seaside floatsum, but an aged collection of cardboard that once backed an assortment of picture frames, pinned through with silver fasteners. The already evocative nature of this box full of absent images becomes even more haunting through Hanevold’s response. The box arrived on 22 July, 2011 – the day of the massacre in Norway, and through the making of a silver and pearl pin for each victim Hanevold memorialises each lost face. Event as well as place is responded to here.
This show allows you to glimpse into the artists imaginative process, outcomes loop back to the inspiration, but they also project what the artist carries with them – the events and places that touch them. As the viewer, on my lunch-break – I must say the jewellery was interesting to me.

The exhibition can be seen free of charge in the Grand Gallery of the  National Museum of Scotland until 16 September, 2012 .

1 thought on “Lunch at the Museum”

Thursday swim. #wildswimming #wildswimmingscotland #womenswimming
Happy Birthday Finn!
Smug running selfie. There are a few things that give me that smug runner glow… including but not limited to… hitting my step count before my run starts, doing a commute on foot instead of in a bus or car, being out running on a beautiful evening, running past people stuck in traffic… all of which I achieved this evening. #womenrunning #mumlife #runlife
Much needed swim today as respite from my busy busy life. The water was wonderful, but also did that trickster thing of being warmer (so we could stay in quite a while) but still properly cold, so that by the time I got out I could only just tie my shoe laces. Lots of lovely groups of kids exploring along the river today. Good fresh air energy all around. #wildswimming #wildswimmingscotland #waterofleith #womenswimming
Running to the top of the world… or at least to the top of Craiglockhart Hill! Good start to the weekend. Now to stretch and drink plenty of water. #edinburgh #craiglockharthill #womenrunning
Lovely buzz from our swim this morning. Sunshine and fresh spring growth all around the riverbank. We swam for almost 20mins and then sat in the sun and enjoyed our hot drinks. Bliss. #wildswimming #wildswimmingscotland #waterofleith #mumlife
My Tweets