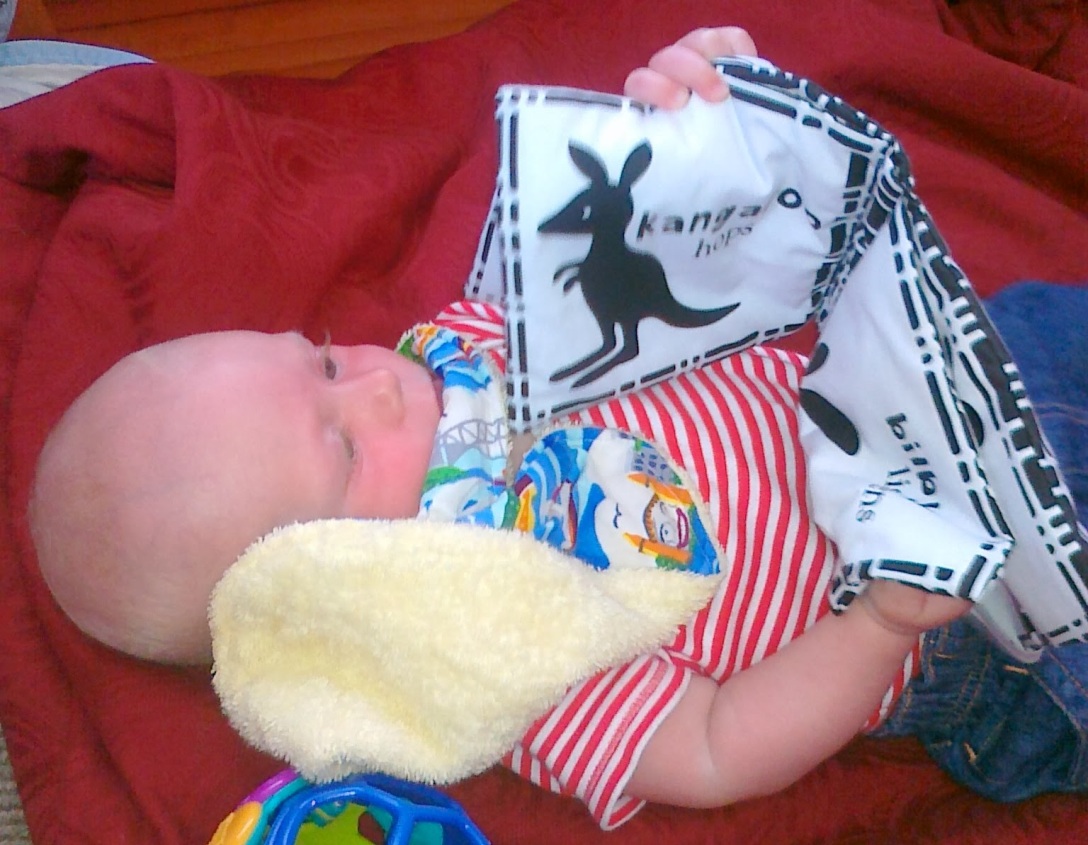 One night Rafa and his mum and dad were on their way to visit Nanna Helen in Nowa Nowa. They drove for a long time and nothing exciting happened.
Then all of a sudden, when they were half way between Stratford and Bairnsdale there on the road ahead of them they saw an animal. Dad slowed down the car.
‘Is it a wallaby?’ Asked mummy Sandy.
‘Is it a koala? Asked daddy Jon.
‘Is it a bandicoot? Asked baby Rafa.
They soon saw that it was non of these things. It wasn’t a wombat or an echidna or a rabbit or a fox either.
It was somebody who did not live in the Australian bush at all.
It was a little lost dog.
Dad stopped the car. They all agreed that a lost dog could not stay on the road. But how should they catch it?.
‘We need a torch.’ said mummy.
‘We need a lasso.’ said baby Rafa.
But they needn’t have worried. As soon as daddy opened the car door the lost dog wagged it’s tail and hopped into the car.
‘Can I hold it daddy? Please!!’ Begged baby Rafa.
Daddy thought the lost dog looked like a very nice dog, but he did not think baby Rafa was quite big enough to hold onto a lost dog just yet. He gave the lost dog to mummy Sandy.
The lost dog turned around in her lap three times, sniffed and then settled down in her lap for a sleep.
Mummy looked out the window, and because they were going past the Dargo turn off she decided that the lost dog would be called Dargo dog.
‘Dargo dog. Dargo dog, Dargo dog,’ sang baby Rafa.
‘Go to sleep baby Rafa,’ said mummy and daddy together.
Soon baby Rafa and Dargo dog were fast asleep.
Mummy and daddy were wide awake. They wondered where Dargo could have come from. She was not a puppy, she was quite clean, and liked people. There were no farm houses that they could see, so they decided Dargo dog had better go with them.
When they arrived at Nanna Helens it was very late and very dark, but she had left the light on for them. Mummy carried Dargo dog and daddy carried baby Rafa.
Nanna Helen got a big surprise when she saw that mummy Sandy was not carrying Baby Rafa.
‘We found a dog!’ she announced.
Nanna Helen rubbed her eyes with surprise, when she had her eyes open properly she agreed that Dargo was a very nice dog.
‘Dargo dog. Dargo dog, Dargo dog,’ sang baby Rafa.
‘Go to sleep baby Rafa,’ said mummy and daddy together.
That night Dargo dog slept in the dog pen at the side of the house. She had a bowl of food, a bowl of water and a nice warm dog house. It smelt a bit funny, but it was much nicer than the scary road with all those loud cars and headlights. But she missed her home.
Before they went to bed that night mummy and daddy wondered what to do with Dargo dog. Could they keep her? Did they know anyone else who would take her and love her? What if she had a family who were missing her?
‘Dargo dog. Dargo dog, Dargo dog,’ sang baby Rafa.
‘Go to sleep baby Rafa,’ said mummy and daddy together.
In the morning Dargo dog was very happy to see them. Daddy and baby Rafa took Dargo for a walk along the river and they were all very happy.
But they knew they needed to try to find out if Dargo dog had another family.
Mummy and nanna Helen took Dargo dog to the vet in Orbost. Daddy and Rafa stayed home and played, but they both wondered what was happening with Dargo dog.
At long last the phone rang. It was mummy, ringing to say that Dargo dog did not have an identity chip, and no one had reported her missing.
Mummy I could look after Dargo dog,’ said baby Rafa.
‘No.’ Mummy said sounding sad, the vet had taken Dargo dog away to the Pound.
‘I told the vet that we could look after her,’ said mummy, ‘but she said it was the rules.’
When mummy got home she and daddy and baby Rafa had a big hug. They remembered how special their family was already – but they were sad not to have Dargo dog anymore.
That night they imagined Dargo dog in a cold kennel, with lots of other noisy dogs around and no one who knew what a special dog she was. Even though the nice lady vet had promised to try to find Dargo’s family daddy said he would use the internet to help Dargo as well.
‘Dargo dog. Dargo dog, Dargo dog,’ said baby Rafa sadly.
‘Go to sleep baby Rafa,’ said mummy and daddy together.
In the morning daddy put a photo of Dargo dog and a description up on the East Gippsland Lost Dogs Facebook page.
Twenty minuets later he came running in to where nanna Helen, mummy Sandy and baby Rafa were playing.
‘Guess what,’ he said, ‘Dargo dog is called Biscuit!’
‘Biscuit?’ said baby Rafa. ‘How do you know?’
‘Because I got a reply to my Facebook message.’
They all sat together to call Dargo dogs owners. None of them could quite think of her as Biscuit, but they were very pleased that she had a home to go to after all.

Just your regular Saturday afternoon treasure hunting. Thanks to @unveiledgames
Swim in the rain today. We are into our autumn swims now. Noticeably colder in the river and we went for a short swim and a long chat on the riverbank. Perfect and much needed. #wildswimming #wildswimmingscotland #womenswimming
Family day out on a surprise day off. #colintontunnel #edinburgh #bikelife #bike
Book recommendation from me. Content warning- grief, mental health, miscarriage.
Night hike with Beavers. Can’t beat those views! #edinburgh #arthursseat
Thanks for the photo mum! Pre lunch swim followed by ginger tea and plant chat at Redhall walled Garden. #wildswimming #wildswimmingscotland #womenswimming
My Tweets