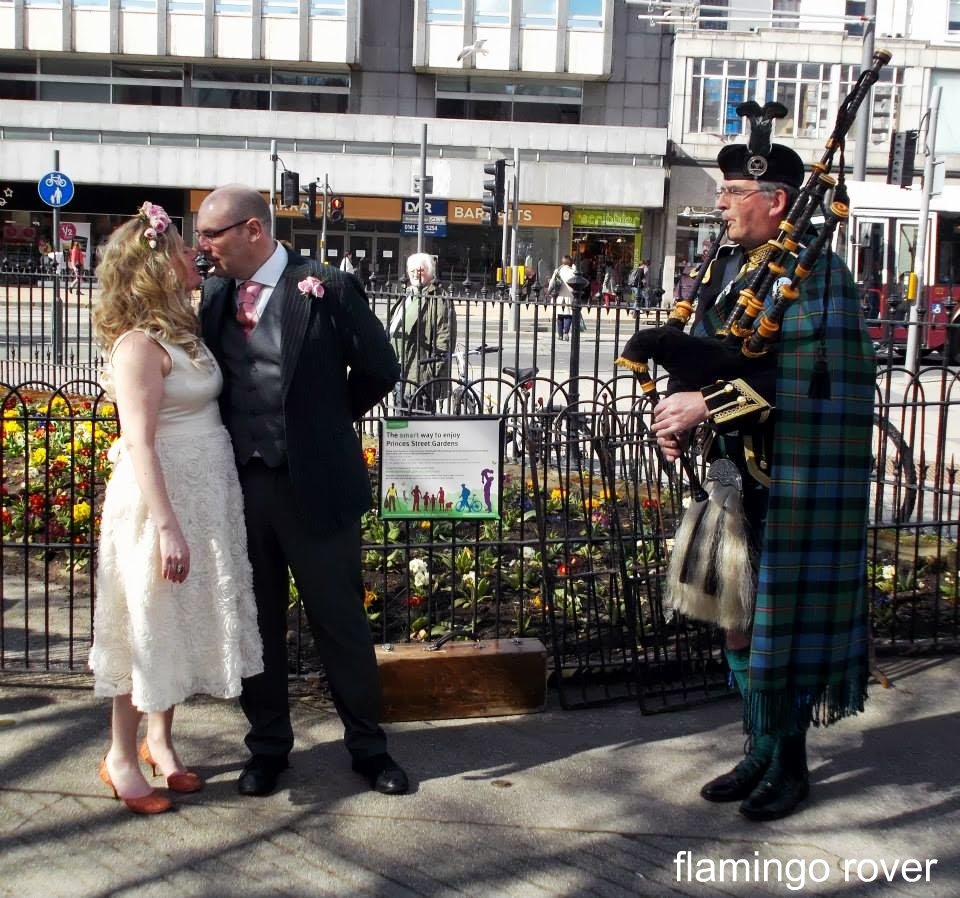 I have names on my mind of late. I have often pondered, as girls tend to do getting married – and though the question of whom I might marry has been very uncertain for the last thirty years I’ve always felt certain that if  such an event took place I would not be changing my name. The tradition in my family of strong women is to retain your own surname on getting married and when thinking of it in the abstract I never felt inclined to alter my initials.

In the hear and now of being newly-wed I am however quite happy about taking on my husbands name – though still entirely disinterested in giving up my own. So Ms S.B is becoming Ms S.B-H, (the Mrs, though I don’t mind being referred to as Mrs by my Mr, it is still a little alien to use in everyday life).

So I have changed the signature on my email and my name on Facebook… but what next? Bureaucracy is what is next. With my current passport having less than 12 months before it expires I thought that would be the place to start, so with my new marriage certificate in hand I happily set about filling in the passport application form.  According to what I could make out on the form all I needed was my marriage certificate and some other ID with my old name and things would be right as rain.

Then I got a bit further on in the form filling out process and discovered I needed a photo witnessed by a fellow Australian. I had some of those gathered about me for the wedding, but they were long gone by the time I started on the bureaucracy. So I got myself a photo and posted it off to London to one of my high school buddies, stamped – self addressed envelope included to hurry it back.

It arrived and I filled out my guarantors details – scarily realising in the process that I had known her for 17 plus years – turns out we are indeed old. With all the other boxes ticked I printed out the form, read over it, about to put my shoes on to head to the embassy and discovered that she also had to sign the form.  So off it went.

Back it came and I got my shoes on again, got all my documents assembled only to discover that the little photo my friend had witnessed for me was absolutely nowhere to be found. Whether it is a baby brain thing or a packing thing or a general chaos of our lives thing I do not know – but there was a temper tantrum. The husband helped me look – fruitlessly and then he calmly headed off to the post office with another photo and stamped – self addressed envelope while I sat down and Skyped with one of my Aussie mates to bemoan the misery that it was to be me.

Back the photo came, arriving on a Saturday when the Embassy was closed, still I opened it up happily enough, finally things could go forward… only to discover that my friend had miss-spelt my husbands surname. I am pleased to say that at this point I managed to laugh rather than throw another tantrum. I pondered – would the bureaucrat look closely at it? Could I alter it to the right spelling? Should I send her another photo? Should I give up the whole notion of a new name?

Sunday night I was sitting up in bed writing some notes to myself in my little notebook and what should fall into my lap but the original, correctly named photo.

I put on my shoes and caught the bus to the embassy with a light heart on Monday morning, certain that my new name was within sight. Unfortunately the very nice embassy lady informed me that although the British wedding certificate signifies to the Australian persons who care about such things that I am married, it is insufficient evidence for an Australian to change their name on a passport. I must send of a pile of papers to the Registry of Births Deaths and Marriages in the state I was born in and apply for a legal change of name before I can be Ms S.B-H.

So it was back to the paperwork for me.

At least the guarantor signatures on my passport application form remains valid for six months – and I am storing it in a safe place.

Could I be more pink? First run in the canal in a month or so- because I knew he weather was bad enough to keep it quiet. You can see Arthur Seat outlined in the background. Edinburgh is a great city for far off views. #runlife #canal #outside #mumlife #scotland
Worst tooth fairy ever. Second tooth out in one week. We forgot for two nights then finally got the tooth under his pillow. The next morning I asked if the tooth fairy had come... and as the words came out of my mouth I remembered that I was the tooth fairy and no the tooth fairy had not come. Luckily he was busy building glider wings to transform himself into a prehistoric gliding creature and said he would check later. I was able to get 50p under his pillow and retrieve the tooth without him noticing. #winning #kidlife #mumlife #garden
Not all the days are like this, but some of them are. Sunshine on children’s faces and in the laundry. Plums growing... will it be a fruitful year? #mumlife #trees #sunshine #scotland #spring #laundry
Another day another neighborhood outing. All four of us got put today as it is our one full day a week to all be together. Celebrating tomorrow’s birthday for our about to be five year old with feasting and a homemade piñata. #staysafe #mumlife #blossom #kidlife
After a few weeks being anxious about going on walks and getting increasingly bored at home my six year old was ‘encouraged’ out this morning - and guess what- he had a lovely time and came home a much happier bunny. Still a long road ahead with these kids missing old freedoms and friends, but outdoor adventuring helps. #outdoors #citylife #mumlife #edinburghcity #edinburgh #kids #staysafe
Still life in yellow. #booklife #bookstagram #booklover #mumlife #stayhome #readingislife
My Tweets