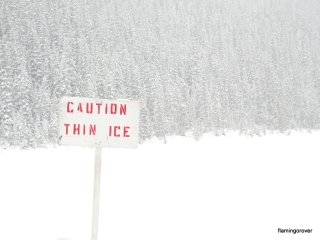 As of tomorrow (27th of November) I will have been travelling about the globe for six months. During that time my Mum has been incredibly restrained in her worry about me, or at least she has been very restrained in expressing her worry for me- to me.

I was on a bus near the coast in Turkey back in August when she called me to chat, during our conversation I mentioned I was thinking of going para-gliding that afternoon, there was a pause during which I cursed myself for telling her, and after a few beats of my heart she burst out with:
‘Sandy, you are going to turn into a Flamingo!’
Like I said very restrained.
After I posted my Turkey Blue blog about getting up close and personal with the waters of Turkey she emailed me from Vietnam to say:
‘Your story of swimming alone in the Turkish sea as you said came close to being every mothers nightmare – so it was good to know that you were safe on shore writing it!’
So I thought I would share a few other slightly hairy adventures, some recent, some a little older so she can read about them after the fact and know that I am safely tucked up at the Vancouver library.
There was the time I went in a Peace March in Jerusalem, everything was just fine, and it really did not feel any different from being in a rally in Melbourne- people were there with their kids and the worst thing that happened (apart from too much sun) was one man driving past and sticking his finger up at us. But… then in a place so riven with conflict it could have become a flashpoint. Happily all was well- though my photo with a placard might be on a list some place.

There was also my accidental hitch-hiking incident in Greece. It was going fine until the man driving me said he needed to make a quick stop and drove us into a quarry. I sat there making uncomfortable small talk to my illegal Albanian driver wondering what on earth we were doing and if I should be making a run for it. After five very long minutes a tip truck drove up and dumped a load of stones in the tray of my drivers Ute; and I realised that we were not in a quarry for a seedy assignation- but to get stones!

And then there was last week when I was road tripping about in the Rockie Mountains in Alberta, Canada. There was spectacular scenery, heaps of fun to be had in the snow and some rather scary roads. Even on the first few days of our road trip, when we had sunshine, blue sky and magic views there was always an element of danger; you can’t drive along a road that has regular warnings about avalanches, and actual avalanche shelters built over sections of the road without your heart rate raising a little.

Still the newness of a snowy winter landscape dulled the reality of the danger, and even having to dig ourselves out of the snow added to our sense of adventure.

And then mother nature turned. The road between Jasper and Banff passes through the icefields, and in the right conditions you can stop off at pretty regular intervals and view glaciers; in the wrong conditions you don’t drive, or you leave early before the roads close (as we did) and you grit your teeth the whole way and hope to make it through. On the first scary driving day our normally jovial driver, and boisterous passengers were both equally silent as we drove slowly along steep iced up roads drifting with powdery snow. 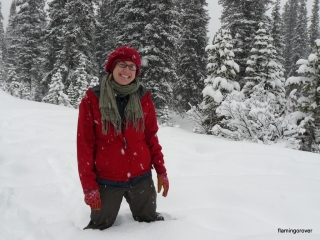 And we made it safely through the day.

Then we had a full day in Banff to recover and enjoy all that was good about the very cute Canadian mountain town: sparkling Christmas lights, snow shoeing, cheap drinks, slippery side walks, sulphur hot springs and of course snow galore. 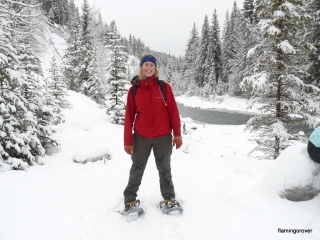 Oh and there was a also a slightly ill advised solo climb up the side of Tunnel Mountain where I thought there was a path but ended up having to hoist myself up a steep snowy slope from tree to tree.
The next day, on a sparkling clear morning, with the pink morning light showing off just how beautiful the mountains were we had to leave. Even though the doors were iced shut we managed to get on the road. Fortunately, or unfortunately our engine had made it through the freeze.

On our second and third scary driving days things got a little better and a little worse, we were back on the Trans-Canadian Highway, more traffic, more regular snow- ploughs, but this meant the iced roads were even more chewed up, plus we had big trucks to contend with and dirt galore. I was sitting up front on the second scary driving day and was a close witness to the constant bombardment of filth being thrown up at us; our windscreen wipers failed absolutely and the attempt to fix them using paper bags from the doughnut shop only helped for a short time.

The last day was a repeat of the day before, clear patches followed by slippery, dirty conditions, only this time we ran out of water for the broken windscreen wipers and we saw the wreckage of far more vehicles than we had on any previous days.

But we made it out of the mountains and back to rainy Vancouver safe and sound on our snow tyres.  So… Don’t worry Mum!

Could I be more pink? First run in the canal in a month or so- because I knew he weather was bad enough to keep it quiet. You can see Arthur Seat outlined in the background. Edinburgh is a great city for far off views. #runlife #canal #outside #mumlife #scotland
Worst tooth fairy ever. Second tooth out in one week. We forgot for two nights then finally got the tooth under his pillow. The next morning I asked if the tooth fairy had come... and as the words came out of my mouth I remembered that I was the tooth fairy and no the tooth fairy had not come. Luckily he was busy building glider wings to transform himself into a prehistoric gliding creature and said he would check later. I was able to get 50p under his pillow and retrieve the tooth without him noticing. #winning #kidlife #mumlife #garden
Not all the days are like this, but some of them are. Sunshine on children’s faces and in the laundry. Plums growing... will it be a fruitful year? #mumlife #trees #sunshine #scotland #spring #laundry
Another day another neighborhood outing. All four of us got put today as it is our one full day a week to all be together. Celebrating tomorrow’s birthday for our about to be five year old with feasting and a homemade piñata. #staysafe #mumlife #blossom #kidlife
After a few weeks being anxious about going on walks and getting increasingly bored at home my six year old was ‘encouraged’ out this morning - and guess what- he had a lovely time and came home a much happier bunny. Still a long road ahead with these kids missing old freedoms and friends, but outdoor adventuring helps. #outdoors #citylife #mumlife #edinburghcity #edinburgh #kids #staysafe
Still life in yellow. #booklife #bookstagram #booklover #mumlife #stayhome #readingislife
My Tweets