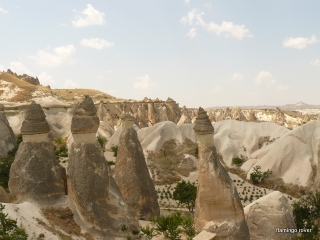 When I arrived in Cappadocia at eight in the morning after a 12 hour bus ride and not much sleep I had two missions:
(1)    Caffeine
(2)    Flamingos
After breakfast and coffee (mmm, nescafe), a few exclamations about the amazing landscape and a number of conversations with local travel agents and travelling companions I had a driver for the day and a fellow flamingo spotter. Ivana- a Serbian woman I met on the bus ride to Cappadocia wasn’t realy sure what the whole Flamingo thing was about but was up for the adventure. 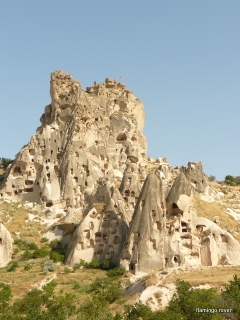 Two hours after we got off the bus I handed over a wad of Turkish Lire and I was back on the road with my new friend Ivana, a taxi driver with no English and only a vague idea of where the Flamingos could be found, some binoculars I bought in Amman, a small bag of peanuts, very little sleep, very little camera battery and my new very pink earings from Istanbul as a lucky charm.

We drove for another two hours and in between naps we spied lush blue lakes surrounded by green, the famed fairy chimneys and fields of Sunflowers. After several conversations with roadside locals our driver delivered us to the Saltan Marshes, the bird watching center of Turkey and we were told it would be ‘5 mins’ before our official Flamingo driver would be with us.

A plate of amazing local grapes, a couple of cokes and a nap later we piled into the most unlikely safari vehicle I have ever seen. Squashed into the hot, cramped little Russian Jeep were Ivana, myself, the taxi driver along for the ride, our bird guide/ driver, and an amazing telescope.

We drove about on the severely rutted salt marsh of the national park stopping occasionally to spot herons, eagles and other things to small fry for a Flamingo watcher to waste her time on.

After a period of hot bumpy driving we pulled over again and our bird spotting driver told us if we wanted to see Flamingos we must remove our shoes, roll up our pants and follow him. Pausing only to remove his own pants our driver set off with his telescope across the marsh and we followed along as best we could.

Having frowned at my decision to go barefoot rather than in my sandals, Ivana lost one of her new fake prada thongs at the first marsh; but happily claiming to be Cinderella she soldiered on barefoot, and soon spotted plenty of frogs amongst the mud to kiss and was converted to the joys of barefoot adventuring.

I had no barefoot worries to cope with. In Tanzania I was frequently lectured for going barefoot while on safari, so it made me a happy lady to be on a Flamingo adventure on which bare feet were mandatory.

We slowly moved towards a group of birds we could hear but not see. Although the mud was a lark the sharp dried out salt flats a little more tricky for the soft footed to navigate. Spiky ground however had no power to diminish my excitement as our guide paused to focus his telescope and we all peered through at the happy birds in the distance. 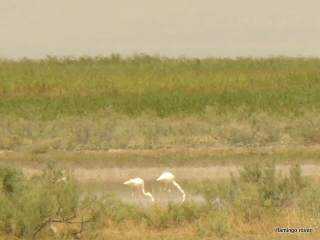 At long last the Greater Flamingo was in sight, less pink in the body than the Lesser, but with striking long pink legs and under wing, when they stretch or take flight there are brilliant flashes of vivid pink.

Close and closer we stalked, our motley band of (mostly) recently converted Flamingo rovers, all very happy to be out twitching in the middle of Turkey. We always stayed at a respectful distance, so I must say that our best views were still through the telescope rather than the naked eye, but the experience of walking barefoot through the marshes in pursuit of Flamingos was absolutely exhilarating. Unmissable.

And still so much of Turkey still to explore.

1 thought on “Twitching in Turkey”

Today’s swim had the kids along. They stayed on dry land and explored the riverbank while we swam. You could see your frosty breath while you were in the water- a first for me. Still in a love hate relationship with wading through thigh deep autumn leaves. The ginger tea and biscuits were very necessary post swim. Sunny day- but no sun down in the river. Total buzz as usual! #wildswimming #wildswimmingscotland #mumlife #waterofleith #riverswimming
October jaunt up Calton Hill. This time three years ago we were exploring in Barcelona. I’m looking forward to visiting further afield again, but in the meantime I love doing local tourist things. Our outing to see these spectacular views also incorporated a couple of city errands and a catch up with pals. Can’t ask for better than that on a day out. #scotland #edinburgh #CaltonHill #caltonhilledinburgh #windyday #mumlife
Getting colder, but still swimming. The thick carpet of autumn leaves under the water is a little disconcerting, but once you wade through those it’s all good. Quite a few friendly dogs visited us today. #wildswimming #wildswimmingscotland #waterofleith #mumlife
The river was up this week. Thanks @emma.oconnor.author for the picture. #wildswimming #wildswimmingscotland #waterofleith #scotland #womenswimming
Yesterday’s wild swim was followed by a cycle a little further up the river to read and listen to poetry with a lovely group of children and adults. Couldn’t have had a better #nationalpoetryday. After a very hectic week I felt blessed by every part of yesterday- from the lovely company for our swim, the unseasonably warm weather and the utter magic of sharing poetry and creativity by the river. #poetry #wildswimming #wildlife
Many of the conversations we had during this Thursdays swim were around the female body. Until I was thirty I felt my body - my belly and my boobs needed to be kept hidden away. It was a radical liberating act to purchase a bikini before my 30th birthday- and ten years and two babies later I’ve kept wearing them. This photo was taken in Turkey the year I turned 30- and I could hate it, and hide it, but actually I love it. My relationship with my body is still complicated-but I was (and am) strong, happy in the water and proud of all the things my body can do. #bodypositive #body #womensbodies #womensbodiesareamazing
My Tweets