I had this thought as I travelled across Jordan, somewhere in between Wadi Rum and Petra I realised that if I was on my original two month trip I would be in New England right now, possibly eating fish and chips on Marthas Vineyard.  But somehow I got lost on the way to Cape Cod and ended up in the Middle East.  For me it is a happy, albeit rather hot accident; but for many others a trip to the Middle East is a once in a lifetime pilgrimage.
Climbing Mt Sinai in Egypt was a cool overnight adventure for me, but as we waited for the sun to rise pilgrims from around the world were making their way up to a place of huge spiritual significance. Many were going slow with the steepness of the 700 steps, but all had the spirit of the place firm in their hearts as they climbed. Pilgrims make it up the final accent and barely pause for breath before breaking into song- I just chat to my friends about Arnold Schwarzenegger movies and star gaze.
I enjoyed my visit to Mt Nebo in Jordan, there were good views out over the Dead Sea towards Israel, cool mosaics  and the road up was like something out of Top Gear- but many people visit to pay homage to the place where Moses (possibly) saw the Holy land before he died.

There is quite a difference between the experience of visiting churches when I was in Italy a few years ago and visiting churches in the Middle East. Around Florence you visit to see the architecture and the fresco’s, in Jerusalem and Bethlehem the churches I visited were alive with worshipers. 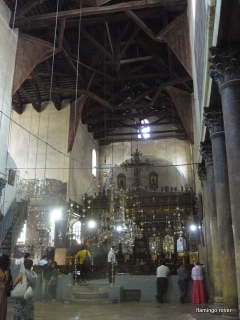 One of my favorite churches has been the  Holy Church of the Sepulchre, inside the old city in Jerusalem, friend and I arrived in the courtyard just as the bells began their call- ringing is almost too subtle a word for the righteous noise which reverberated off the ancient stone.

The aural experience continued inside with chanting- incomprehensible to me but beautiful. Inside was a maze of low doors, little caves and quiet places combined with ornate vaulted ceilings brought almost to the lowly level of humanity with dozens of lanterns. And of course we shared the experience with many pilgrims.

On mass pilgrim tourists are as appealing as any other bus load of tourists, but these people are visiting to do more than take a photograph, they want to stop and pray, to sing and above all to feel the magic of the place. The enthusiasm of tourist pilgrims to immerse themselves in places often led them into conflict with holy men and their local worshipers. For myself I think they added to the spectacle.

This purposeful travel makes an interesting contrast to my meandering accidental tourism. For pilgrims kissing a particular rock or sending your prayers out from a particular mountain makes for a successful journey. I have not figured out how I will measure the success of my own journey. My purposelessness is occasionally at the forefront of my thinking as I potter about from place to place, but then I make a new friend, see a cool place, have a good dinner, or a beer on another balmy evening and I forget about my purposelessness and just enjoy the moment.
It is not just in visiting places that you get reminded of your heathen status, getting to know local people comes with its own perils. A friend was invited to Shabbat dinner by a Jewish family, he worked very hard to observe the behavior of others and follow suit, still in a quiet moment in the meal, wanting to make himself useful he poured wine for those sitting around him, only to be told that although it was fine for him as a guest to drink wine he was not allowed to touch it.
No matter how hard you try to be a polite hethan you always end up putting your foot in it.  Living with a devoutly Muslim family in Jordan I always tried very hard to avoid causing offense, but I still had moments of blundering about chatting during prayer time, and probably causing subtle offense in other ways.
But along with the blundering comes learning about the world, and pondering different ways of thinking. Sitting quietly day by day and talking about Islam with my hostess in Jordan, she told of finding all the answers to all the questions she had ever had in the Koran. As she talked  I pondered whether that was something I sought, was there a security in what she has found, a certainty, knowing the path you are on, having a guide book to tell you the way, answer all your questions. There is something very appealing in that. But unlike an organised holiday you cannot talk about your guide behind his back and you cannot get off the bus and do your own thing for a day or two and then get back on board.

In Jordan as I sat up on mountaintops watching the clouds go by and birds fly oh so high up on air currants I couldn’t see; I asked myself about god and I looked in my heart and tried to see if there was belief there, could I get on this train? With its answers and its rules, and the answer for me was no. I did not believe.  I believed in mountains and birds, but not god.

At the Western wall in Jerusalem on a Friday night I wandered about amongst the massive crowd and watched the various groups of men and women going about their business, it was spiritual business, but also the business of life; people were singing, dancing, praying, flirting, waiting for their husband, chatting to their friends. 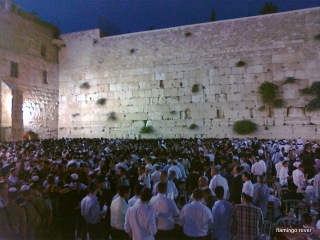 Walking amongst so many people out celebrating life and faith I felt my own faith move-  my faith in humanity. Yes it is a sight of deep conflict, but it is also a living place. And whatever force it is that brought me here rather than someplace else, I am thankful to be here, in the land of calls to prayer, handsome Hasidic Jews, the birthplace of Jesus, holy mountains, and my personal favorite the Dead Sea.

1 thought on “Heathen in the Holy Land”