Having never travelled in pre-revolution Egypt I can only conjecture the difference the revolution has brought to the country. As a tourist I only graze the surface of knowing what real life is like here. So the following impressions are only small pictures of a large and complicated story.

In the beginning doing the typical tourist thing in post revolutionary Egypt has its perks, less tourists to battle with always feels like a good thing. My visit to the pyramids was spectacular, and relatively devoid of other travelers. This was great for me as I got to go inside a pyramid without bumping elbows with a single tourist.

My early morning trip to the museum was also relatively quiet, allowing for a very happy mornings exploration amongst the dimly lit mass of pharaohic treasures. Again amongst the tiny magical market stalls at Khan al Kahlili I was pleased to be amongst locals rather than tourists. There are tourists around, but at the moment they don’t overrun the place, much to the disappointment of  local camel drivers, souvenir sellers and drink vendors. In a place which was economically depressed before the revolution I can only imagine the impact the downturn in tourism is having on those who rely on tourism for their income.

Travelling downtown cars roll along the streets as thickly and chaotically as ever, but here and there you can see scars from the revolution, smoke blackened buildings and gaps in street signs where protesters have ripped down Hosni Mubarak’s name. Though the cache inside the museum remained untouched throughout the Revolution, the blackened building next door tells of how close the chaos came to the treasure trove.

Months after the revolution I spent the night out on the town with a charming group of ex-pat ladies on the first Thursday night after the lifting of the curfew. Thursday being the Friday in the Egyptian working week and it being the first time many had seen each other since they were evacuated, meant there was much to be celebrated and much to be remembered. Everyone had a Revolution story: tanks outside the supermarket, gunmen on the streets, looters tied to trees, long waits at the airport, families separated, anxiety and uncertainty abounded. 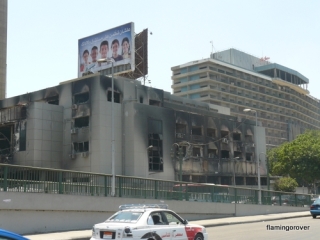 One young American woman was evacuated and had to leave her Egyptian fiancé protesting in Tahrir Square while she prepared for their wedding in the US. She told us that the upheaval of the Revolution was a perfect remedy for pre-wedding nerves.  Her story ends with a wedding and a return to Cairo, but not all the young men who went to Tahire square had such happy endings. A young artist Ahmed Basiouny, who lost his life at Tahrir Square is having his life and work celebrated at the Venice Biennale this year.
We went out in Zamalek for the post curfew girls night out. It is a well to do suburb on an island in the Nile with leafy embassies and great shops. Its close proximity to downtown made Zamalek a scary place during the Revolution.The women who lived there through the Revolution were afraid to leave the house for fear of roving gunmen.  Reclaiming it post Revolution and post curfew was an important marker of a city carrying on.
As I continue on my journey, out of the city and to the Sinai Peninsula I begin feel the burden of being a post revolutionary tourist. Dhahab is a coastal down with amazing mountains, abundant coral reefs and right now there are very few tourists. 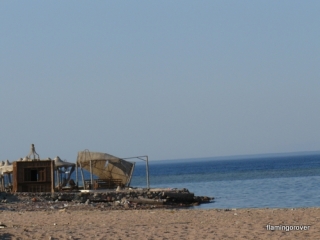 Abandoned resorts with camels roaming through them are quaint for a little while- and then they just get depressing. The towns restaurants, tour operators and taxi drivers far out way travellers and half the time when I walk down the street it makes me want to cry.
The hopeless extent of my own poverty is revealed to me when a young Russian woman living in town, whom I suspect was attempting to run a scam on me found out which low end backpackers I was staying at – and walked away. There are so many people dependant on tourist spending and my paltry dollars can never go far enough. 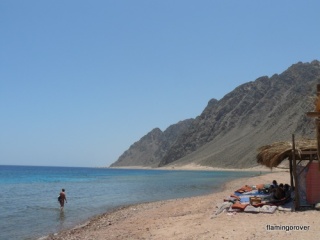 It would be easy to spiral downwards in this headspace-  luckily there are so many beautiful sights to see, many lovely locals who want to put a smile on your face, and a handful of great fellow travellers to share the experience with. With the help of a snorkelling trip, locally caught fish and chips, a midnight climb up Mt Sinai and lunch with the Bedouin I manage to pull myself out of my fug and enjoy my last week in Egypt.

Of course locals need much more than tourists – they need stability in the future. While I am snorkelling Mabarak is in a hospital bed down the road in the ritzy resort town of Sharm El Sheikh, across the water on the other side of the Gulf of Aqaba you can see Saudi Arabia; idyllic as it is you cannot quite forget the dangerous limbo the country is in.
In Egypt people are waiting for the true heat of summer to descend, they are waiting for September and the new set of unknowns that the election will bring. They are waiting but they are also getting on with life.
In Dhahab renovations are taking place, shopfronts are being painted, signs are fixed and walls are being scrubbed. After work you go for a swim and at night at my backpackers all the local men gather to watch their football team win and their mothers try to get them to come home at a reasonable time. (In other words life goes on) Locals talk of the need for everyone to be patient, that things will not change overnight, they are friendly and open about their hopes for the future.
I think the picture I will take away from Egypt is of a friendly, splendid complex place, that I would encourage anyone to visit.
Posted from Dhahab, Sinai Peninsula, Egypt.

Today’s zig zagging run was brought to you by social distancing. All the folks out and about doing a top job of giving each other space and getting some fresh air in their lungs. After a few days of home workouts it was good stretch my legs out a bit. Lots of grief for the world right now, but we can do this. #runlife #stayhealthy #scotland
A throwback to a pic from last summer after the #runnyegg - to link to the great chat I had with @jojofrasermojo for her podcast. Amongst other things we talked about running, traveling, books, swimming, life and family. We had this chat towards the end of last year- so it is a current events free zone if you need some downtime. #wellbeing #runlife #familytravel #podcast #mojo #mumlife #swimming #indiepublishing
Friday night run. The days are getting longer at long last. Felt good to get out... and I got invited to a party by a tracksuited teenager while I was running up a hill. #notsoyounganymore #winning #freshairtherapy #runlife #scotland #mumlife
Went out into the cold last night with a head full of uncertainty about the world. After a very slow bus journey I arrived at @lighthousebks and listened to four fabulous indie writers talk about the work they do ‘challenging the narrative’. Came home feeling the world might just make it! Thanks to Rachel Plummer, @helensedgwickauthor, Jane Alexander and Jemma Neville. #womenwriters #amreading #wain #poetry #indiepress #indiebookshops
Sending rainbows, smiles and co-operation out into the world. And crash helmets just in case. #mumlife #cooperate #rainbow #scotland #kidlife #helmetsarecool #cooltobekind
Another throwback to our Australian summer. Beach days are everyone’s happy place. This one was before the bush fires really kicked off and we were blessed to have a week of Christmas cheer with the family. #australia #kidstravel #beachlife #mumlife #happyplace
My Tweets