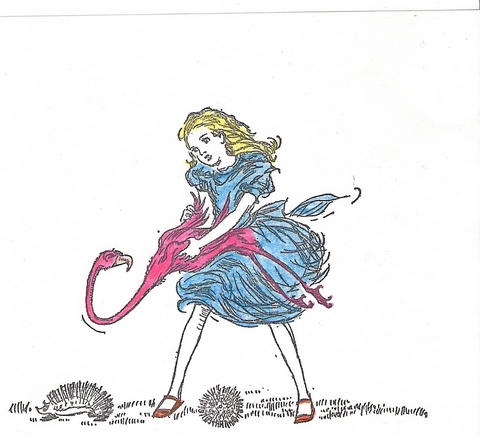 I don’t have a good answer to the question.
I don’t have a quest, or a cause. It was just one of those online meanders that led to a walk to the library and back to the internet and somehow along the way the idea for the trip stuck.  I had been pondering trekking in Asia, an expedition to Antartica and walking in New England but the Flamingos won the day.
I began plotting in October 2010, and my diary for the occasion reads nothing more momentous than: ‘be fun to see if I can put it together- “round the world” ticket perhaps?’
The plan was to take two months off work in the middle of 2011 and to go and see Flamingo’s.  Tanzania and France were early frontrunners as my Flamingo destinations- despite the birds being also spottable in Namibia, Bonaire, Portugal, the Galapagos and many more destinations.
But while trip planning rolled happily along my answer to the question did not improve.
The truth is I have reasons they just don’t roll off the tongue easily, or perhaps they don’t seem worthy enough as an explanation. So I tend to scrunch up my face and say ‘because’.
My answer is more like a jumble of ideas than a nicely arranged soundbite, so when you are asking the question and I am looking at you a little blankly what I am really trying to say is:
It is possible that it is because of whimsy.
Because they are beautiful and strange and larger than life.
Because Lewis Carol imagined them as mallets in the Queen of Hearts croquet game.
Because they are pink and I like pink.
Because they live in arid landscapes.
Because I thought they looked good in neon when I went to Las Vegas.
Because it makes me smile.
If it is an absurd plan I am ok with that. The absurd is worth embracing I think. I only hope the Flamingos are more happy about it than they were about being used as mallets.

At the moment it is about a month until I head off and since the initial germ of an idea took hold a few things have happened to change life the universe and everything; and I will try to write a blog or two about that before I meet my first Flamingo.
And just in case the question should arise, I am also lacking a good answer to the question of what this blog is about. The nearest that I have come up with is that it is a tool to make me write while I am traveling, and to share my travels with anyone who is kind enough to take an interest.  Something more worthy may arise as I go along but I am not holding my breath.

1 thought on “Why Flamingos?”

Another throwback to our Australian summer. Beach days are everyone’s happy place. This one was before the bush fires really kicked off and we were blessed to have a week of Christmas cheer with the family. #australia #kidstravel #beachlife #mumlife #happyplace
I had this whole plan of doing lots of insta posts with sunny skies when we went to Australia. Then I left my phone in Edinburgh and put myself into an accidental social media detox. We’ve been back in Scotland for about a month and I’m slowly easing myself back into things. This was back in December attempting to get four crazy boys and their mums in a photo- we don’t get together every often, so time together is beyond precious- and well worth being offline for. #familytravel #mumlife #australia #downunder #offline
These days I spread the Christmas spirit across all of December- it eases the pressure on Christmas Day being perfect- cos it never is. Tonight we did the Edinburgh Christmas Market with the kids. It was a perfect clear, crisp evening and not too crowded. Midweek is my tip for going with kids- In by 4pm, and on the tram home around 6- that way everyone’s still smiling. Oh and I’m getting the winter vibe in now, cos halfway through the month we are switching it up and going down under. #familyselfie #mumlife #december #smile #hat #edinburghchristmasmarket
In my cardio circuit class today the trainer had us do a round of 50 seconds on, ten seconds off x10. I told myself it was only a little longer than our usual rounds, I should be able to do it. Some of them I could (plank- nailed it) others the clock beat and I couldn’t make it through. On the fresh round she started the same timing - then I think saw that nobody could keep up, nobody was giving their best, so she switched it to 30 on 10 off. It made me think how at this time of year lots of us are telling ourselves we should be able to do just that little bit extra- when what we really need is someone to dial it back. So if you need it here is my permission to dial it back. #gymselfie #notsmiling #mumlife #gymlife
Walking about the city doing errands can be rather dull- unless you’ve got a castle in the background and a buddy to keep you company. With Halloween out of the way Edinburgh is getting its Christmas sparkle on and we did our best to be festive in matching mother and son red. #sickday #edinburghcastle #city #mumlife #selfie #edinburgh
I love learning and I am a great believer in workshops being a great way to get a bit social, learn new skills and invest back in yourself. November 27th will be the last Mending Workshop for 2019 as I’m planning to treat myself to attending a different workshop in December. I have one in mind, which I will share shortly, but I’d love to hear what other workshops are catching your eye. Or ones you’ve done this year and loved? #workshop #sewing #sewsustainable #learning #reuse #mendit
My Tweets